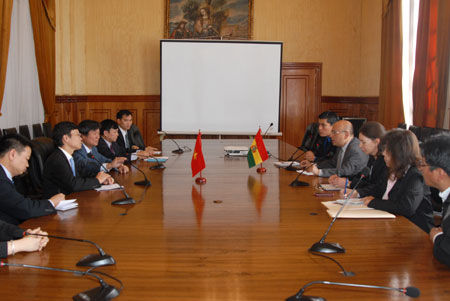 The meeting is in the framework of the visit to Bolivia of Deputy Prime Minister, Mr. Vu Van Ninh, took place from  December 6th to 7th.

Bolivia said that its country currently has 15 telecom companies operating in the field of mobile, internet, in which the national telecommunication company accounting for 40% of market share. Deputy Minister Roy Mendez said that Bolivia and Vietnam are more likely to cooperate when Vietnam has built good domestic telecom market.

Deputy Chairman Pham Viet Muon expressed his desire that telecommunication businesses of Vietnam and Bolivia have the opportunity to discuss about the possibility of cooperation, under the support of the two governments to Bolivia achieve their telecommunications development goal.

Deputy Minister Roy Mendez agreed with the proposal of Deputy Chairman Pham Viet Muon, and stressed that both sides should set out early plans for cooperation to implement, firstly the construction sector as broadband lines in the big city, digital applications in traffic controls...