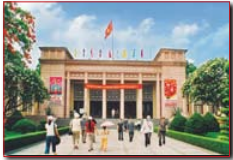 The museum is lo cated in the center of Thai Nguyen province on the poetic River side. It is considered to be a
cultural works with large scale and beautiful architecture and it has been awarded the Ho Chi Minh Prize on culture and art in 1996. 3000 documents and original items on traditional culture of 54 ethic groups are exhibited and stored at the Museum. The Museum has both indoor and outdoor exhibition systems. The indoor exhibition system includes a solemn space (lobby) with a statue of Uncle Ho and three children in 3 regions: North, Central part and the South, a relieve on precious wood with spectacle of characterized festival of ethic groups and some general spectacles of cultures of Vietnam ethic groups. There are 5 exhibition rooms introducing the cultures of ethic people dividing into languages: Vie – Muong, Tay – Thai, H’mong – Dao, Mon – Kh’me, Nam Dao and Han. Each of exhibition room are displayed by theme: Origin of ethic people, local residence, economic activities, eating and
drinking, housing, costumes and typical cultural and spiritual activities. Outdoor exhibition system displays an exhibition of 6 regional cultures of Vietnam includes cultures in: the Northern mountainous area, Valley area, Middle land – Northern Delta, Central – Coastal Part, Truong Son –
Highlands and Southern Delta.Museum of Cultures of Vietnam Ethic Groups is a highlight of Thai Nguyen Tourism and is an attractive destination for domestic and international visitors.